Its wedding fayre season again, be prepared for a busy 2014

Its wedding fayre season again, be prepared for a busy 2014

We attended the Grand Bridal Fayre at Greshams Sports and Social Club on Sunday 18th but despite the first of the season, we were more than pleased to see the high number of brides coming through the doors. Is this a sign that brides want to be extra prepared and all booked up early this year, knowing that 2014 is going to be a busier wedding season than 2013? If you were not aware and hadn’t thought about it yourself, then you may be surprised to know that some couples avoided marriage this year due to the unlucky mystery of the year two-thousand and… ‘thirteen’! So on that note, it would be helpful it we suggested that you book early with us for a 2014 wedding dj and disco! We have been taken bookings for 2014 for a number of months now and there are only so many discos we can do in Ipswich, Suffolk and the surrounding areas in one year!

With the wedding fayre aside, it would seem that the myBigFatWeddingDisco.com team never seem to get a rest at the moment – which is all good business of course, so were not complaining! This week we have been at the official club opening day at Ipswich Town Football Club, providing disco music entertainment whilst the fans grabbed a chance to meet and greet the players. 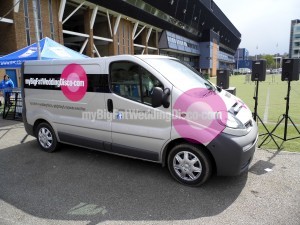 Then on Wednesday 21st August we headed out to the fabulous, historic Wolverston Hall, followed by a visit to the stunning Maison Talbooth in Dedham the following day. Then abreast the weekend Saturday 24th we’ve setup ready to provide wedding discos at Waldringfield Golf Club and Hadleigh Prior Hall. Looking forward to both discos tonight and we wish the brides and their grooms all the best for the future.